There seem to be infinite options to track every movement and capture every detail of fleet vehicles and their drivers as they travel from place to place. GPS is the hot technology for this because it also maps routes, offers alternate paths (with coffee stops!), works remotely and is effective almost anywhere on the planet. The technology can even track vehicle speed. But this macro-geo focus may come with a safety gap on the local level when it comes to speeding drivers. By local, I mean corporate locations—the fulfillment centers, shipping hubs, terminals and fleet parking lots themselves—which see high concentrations of traffic, often 24 hours a day.

For those tasked with overseeing these corporate campuses, the GPS gap becomes more significant. Here’s why. While GPS-based technologies are fantastic, not every driver or vehicle utilizes the corporate GPS systems that deliver driver behavior data and accountability. Vendors and employees’ personal vehicles are prime examples. How can you help ensure compliance to posted speed limits, especially at the busy entry and exit points? For answers, we can look to what some of the world’s largest multimodal terminals are doing.

In these locations, profit is dependent upon finding a balance between speed, efficiency and safety. So solutions must work for pedestrians as well as personal and fleet vehicles and third-party contractors. The options are limited. Vertical traffic calming measures—such as speed humps or bumps—simply can’t hold up to the wear and tear of high-traffic, commercial sites. Horizontal measures—like chicanes and chokers—are expensive and permanent, meaning they cannot be moved or used in alternate locations. Additionally, both of these constructed options can be problematic for large commercial vehicles. What does work? For some of the busiest container terminals and commercial-grade traffic environments, radar speed signs have become the go-to solution. Let’s take a closer look at why.

Reminds Drivers to Slow Down and Encourages Better Choices

Usually paired with a speed limit sign, radar speed signs use a small, FCC-approved radar to calculate how fast vehicles are traveling. The actual speed is then displayed on an LED panel that makes up the lighted display portion of the sign. When the feedback display flashes, it makes drivers aware that they are speeding. Most drivers choose to slow down. THIS mechanism—which has a lot of science behind it—is effective in getting drivers to comply with posted speed limits.

The shift in action—conforming to the speed limit—is based on the scientific theory of Feedback Loops, a type of behavior modification that has been studied for centuries. The theory is that if people are given real-time feedback on what they are doing and are given the chance to change their behavior, they will.

Action, information, reaction—or in the case of speeding drivers—compliance. Driver feedback signs deliver this automatically. Research on Feedback Loops and radar speed signs can be found in this white paper, The Science Behind Radar Speed Signs’ Ability to Change Driver Behavior.

We can see examples of how this really works in some of the nation’s largest terminal operations, like the Michelin North America plant in Anderson, South Carolina. Here, more than 450 tractor trailers travel in and out of the plant daily. That equates to one vehicle every 90 seconds. Speeding was a problem, so in 2005, Michelin installed two driver feedback signs along the main entry road. The signs operated in stealth mode for two weeks while they captured data about vehicle speeds. Drivers were unaware that the signs were already working. This data confirmed their expectations: drivers were were not complying with posted speed limits. More than that, the number of speeders was significant. In fact, 74 percent of drivers were speeding, and 80 percent of speeding drivers were traveling at more than double the posted 20 mph speed limit. 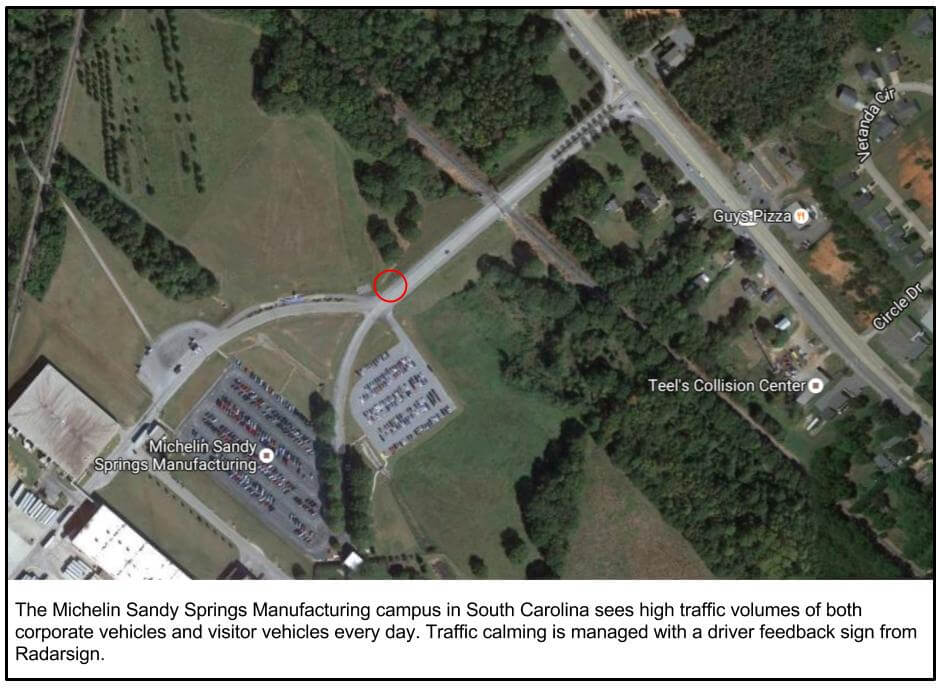 After implementing the feedback sign program, Will Irby, the traffic safety coordinator at Michelin North America, watched speed compliance increase significantly. “Once the sign was turned ‘on’ we saw an

immediate difference. We knew drivers were slowing down, but data collection software confirmed what

we were seeing: 99 percent of drivers began following the speed limit. We reduced 333 speeding big rigs a day to less than five, just by turning on the driver feedback sign.”

In Tolleson, Arizona, the JBS Tolleson cattle processing plant sees 70 to 80 cattle trucks arrive each day. This single-entry/exit plant operates around the clock. Traffic was choked and unsafe due to speeding drivers.

Because less than 25 percent of the daily traffic is trucks and because speed was a problem in several areas, JBS needed a traffic calming solution that would work with all vehicles and that was portable. JBS Operational Safety and Health Manager Bert Hood opted for a sign on a portable base that could be moved from location to location throughout the larger corporate campus.

According to Hood,“The biggest single piece of proof that the sign works is when we move it to a different location at the plant: Drivers still slow down at the old location…as if they have been trained”  He added, “Now truck drivers brag about how slow they can drive their big rig on the plant…even under the speed limit!”

JBS uses the radar speed signs as part of a larger disciplinary system. Drivers caught speeding are issued a warning. If they receive a second infraction, they are not allowed back on plant property. 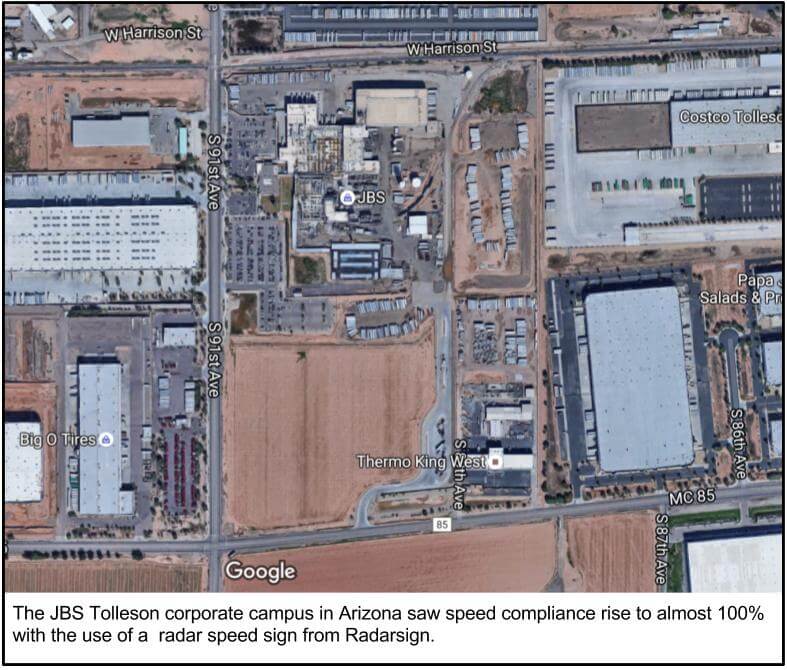 Over time, Hood has measured and documented some of the big improvements. “Before, drivers were going about 35 mph, but now I’d say everyone has slowed down…at least 99 percent of drivers now adhere to the 10 mph speed limit.”

Extending the Boundaries of Safety

Obviously technology has enabled the entire transportation industry to operate more efficiently and with improved safety. We are all grateful for the advancements that technology has delivered to business operations, especially in areas that can’t be measured in dollars: lives protected. It’s good to know that even when one great solution can’t take care of it all, there are other tools that can fill in the gaps where no measures exist…yet. When those areas involve speeding drivers or traffic calming, driver feedback signs offer an easy and much-needed safety net that covers ALL vehicles. These improve safety for everyone and reduce corporate liability.