The pole-mounted signs calmly mark the pace of traffic, until a motorist exceeds the speed limit.

Then they start flashing the vehicle’s speed until it slows down. 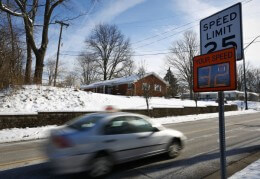 Similar to speed trailers common on some residential streets and construction zones, the signs are cheaper, more mobile and eye-catching. Westerville installed four of them last month after residents asked for new approaches to combat speeding.

Many are satisfied with extra police patrols in problem areas, until the officers leave and speeding resumes, said Westerville Police Cpl. Greg Franey.

According to its manufacturer, Radarsign, [the driver feedback signs] can be used where bulky trailers are impractical. Plus, they can collect traffic data and wirelessly transmit it to the city. They also can withstand vandalism, including gunshots.

The city spent $14,000 last year for the four battery-powered units, about half what four trailers would cost. They’re installed along Main Street near Cleveland Avenue and along N. West Street between County Line Road and Main Street.

Like any speed deterrent, they can lose their effect if motorists become complacent, Banbury said.

“That’s always the danger,” she said. “People do slow down when they see the flashing of the sign. Whether that’s long-term, we’ll still have to find out.”

“They just need a reminder: There’s a speed limit here, and here’s how fast you’re going.”

The Bexley school district also has two of them in front of Montrose Elementary School, along Main Street.

Westerville resident Linda Scovern said she thinks the signs are worth the effort.

A frequent pedestrian, she estimates that more than 90 percent of motorists exceed the 25-mph limit along Main Street.

“This is a street with a school, families, a park and pool nearby,” she emailed the city in November. “Why are the lives of those living in this area not as important as others?”

“It’s a good idea and a lot better than having nothing,” she said in a telephone interview. Still, she added, “The people who are responsible will slow down. But you have others who look at the signs and keep going anyway.”