Marietta, Ga., Oct. 9, 2017–Parker, Texas, takes pride in offering their citizens “country living at its finest.” This small bedroom community of around 4,000 citizens is a connector city for four large cities. Parker residents can relax in its country charm, yet still enjoy city conveniences within a short drive.

However, when you combine the beauty and freedom associated with the open country and the autopilot drive for commuter residents, the sum is a speeding problem. “We have a city plan that requires open spaces. People think that because it looks so country, they can get away with driving too fast,” said Capt. Kenneth Price with the Parker Police Department.

While searching for a solution to the city’s traffic calming challenges, Captain Price landed on radar speed signs as the ideal solution for the speeding problem.

Studies have found that in areas considered to be “autopilot journey” destinations, drivers often break the speed limit, brake too late or don’t stop at pedestrian crossings. Strategically placed, radar speed signs can serve as triggers, stimulating drivers to transition from autopilot to attentive. 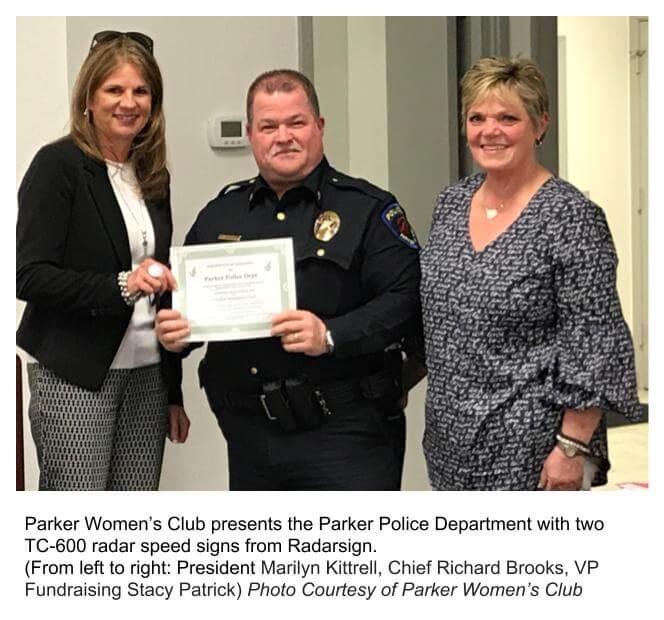 Though Captain Price had identified a solution, there was no budget. As it turned out, he was searching for grant funding for a radar speed sign around the same time the Parker Women’s Club was searching for a way to help their local law enforcement agency. The club exists to provide opportunities for the women of Parker to support their city through charity and community service. Marilyn Kittrell, president of the Parker Women’s Club, contacted Chief Richard Brooks about what the club could do for the police department.

“Our main goal in fundraising is to give something back to the city primarily via the fire department and police department,” said Kittrell. “Every year we go to police and fire chiefs and ask if they have wish list items that aren’t in the budget.”

Through extensive research, the police department and women’s club decided that Radarsign, the manufacturer of the world’s first armored radar speed signs, was the best solution. The TC-600 solar model suited their needs best because it offered multiple alert options and StreetSmart software. “This sign had more capabilities than any of the others I researched,” said Price.

During the initial conversations with Chief Brooks, the chief only requested one sign, but the club decided to purchase two signs because people were so excited about it. “We had such positive feedback about the idea. You know, because it’s something that you see,” said Kittrell. 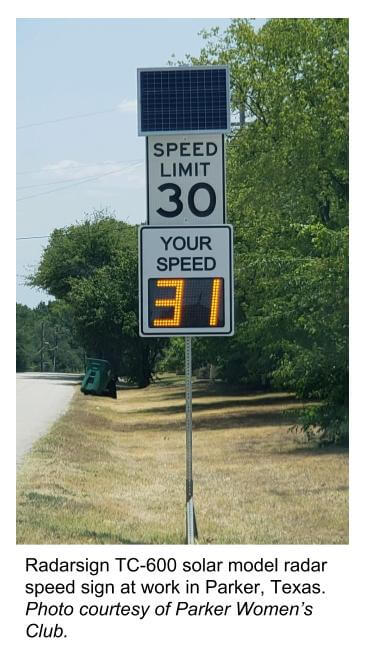 Corporate and philanthropic partnerships with local law enforcement agencies is a growing trend, according to traffic calming expert, Charlie Robeson. Robeson is co-founder and managing partner of Radarsign, the manufacturer of the world’s first armored radar speed sign. “Over the past five years, we’ve seen a strong upward trend of non-profit and for-profit organizations that are coming forward to help fund the purchase of radar speed signs. Helping makes streets safer really is a community-centered effort that benefits everyone.”

To best serve the broader community, the police department decided to keep both signs mobile. They fastened one on a pole and prepared in-ground mounting receptacles at predetermined locations so they could move the sign easily from one site to the next. The second was mounted to a pole on a trailer that could be moved around to other locations where a new problem might be arising.

The first sign placement was along one of the city’s most problematic thoroughfares. “We have a narrow country road where the speed limit is 30, but the average speed on that road is 45-50 mph. Seventy percent of our traffic citations come from that road,” said Capt. Price. “Visually the sign is slowing drivers down. They see it and immediately change their behavior; so it’s already having an effect.”