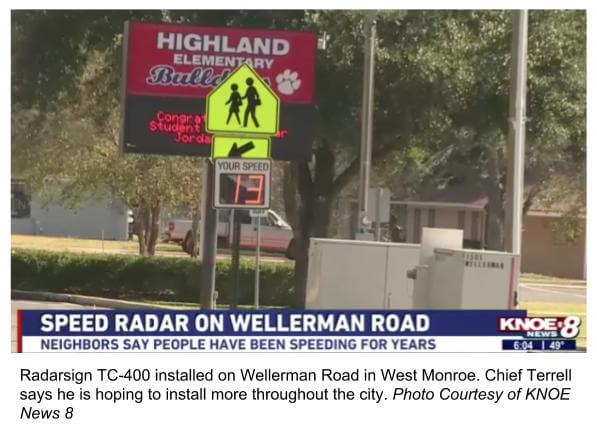 MARIETTA, Ga., December 20, 2018—In Louisiana, the West Monroe Police Department recently installed a portable radar speed sign in a neighborhood on Wellerman Road. The street has a history of speeding drivers, but the problem has worsened due to nearby construction.

CBS reporter Kassandra Merritt with KNOE News 8 in West Monroe reported on the problem and the solution: A portable TC-400 radar speed sign from Radarsign. To really understand how dangerous the situation is, Merritt interviewed local resident Kevin Huff. “We’ve seen a lot more people coming through speeding,” says Huff whose daughter was hit by a car on Wellerman Road 12 years ago.

“She was in the hospital for about a week because we had somebody coming through who wasn’t watching what they were doing,” said Huff told Merritt. “She had some neck injuries, some scars from where the car hit her. She’s recovered now, but it really affected her for a very long time.”

Police Chief Jeff Terrell installed the TC-400 radar speed sign from Radarsign. The TC-400 is a portable, battery-powered radar speed sign that can be used in multiple locations, making it a valuable investment for any community, police department, school or business.

The sign is equipped with Streetsmart traffic data reporting software that captures data on driver speeds, which can be used to validate traffic complaints from the community and provide insights on when speeding occurs. From that information, local law enforcement can determine the appropriate response and choose how to deploy resources.

To read the full article or watch the television story, click here:   https://www.knoe.com/content/news/New-speed-radar-sign-put-in-West-Monroe-neighborhood-501043141.html