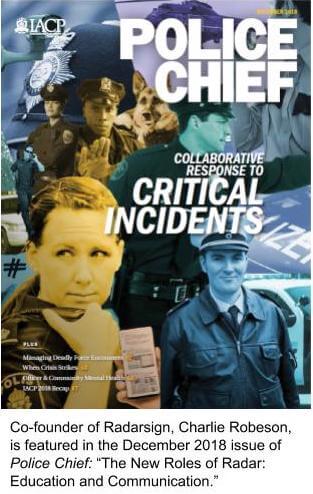 MARIETTA, Ga., December 17, 2018—Since 1934, Police Chief magazine has been the official publication of the International Association of Chiefs of Police (IACP)—a not-for-profit organization established in 1893 to undertake programs leading to more effective, professional policing. As a trusted resource, law enforcement leaders look to Police Chief to learn about their colleagues’ best practices, find solutions, and see new products and services.

In the December 2018 issue, readers get insights from Charlie Robeson, co-founder and managing partner of Radarsign. In his column, “The New Roles of Radar: Education and Communication,” Robeson reports on how police departments can use radar speed signs to educate their communities and start a dialogue with them about traffic calming.

Robeson shares a strategy Police Chief Boyd Woody used in Camden, Arkansas, to address community members’ concerns about speeding by educating them and making them partners in the efforts to make streets safer. “We didn’t want to generate revenue. We wanted to make our streets safer,” Chief Woody explained in an email earlier this year.

In his traffic-calming campaign, Chief Woody used Radarsign’s TC-400, a portable radar speed sign equipped with Streetsmart data reporting software. The plan specified that the sign be moved each week to a designated location to collect data on driver speeds.

When the data revealed repetitive violations, the results were shared on Facebook along with an announcement that there would be enforcement in the problem area. Citizens shared those posts on social media with other citizens, which resulted in informed citizens and a conscience reduction in speed.

In this one example, Robeson shows how radar technology and law enforcement transparency can improve communications and help build relationships between the police department and communities. Simultaneously, the strategy used in Camden illustrates one way that law enforcement can take an active, impactful approach to educating the community they are committed to protecting.

Charlie Robeson is a co-founder of Radarsign, the manufacturer of the world’s first armored radar speed sign. This Marietta, Georgia-based traffic safety manufacturing company was founded 15 years ago to help make streets across North America safer. For more than 30 years, Robeson led sales and marketing efforts for some of the world’s best technology companies, including Avnet, IBM, Dickens Data Systems, and Atlanta-based Computone Systems. Robeson and his co-founders lived in neighborhoods where speeding drivers caused their communities to be unsafe at times. Seeking solutions, the trio determined that driver feedback signs offered the best solution but improvements were needed. The debut of Radarsign’s armored speed signs in 2004 established new industry standards for traffic calming solutions. Robeson is a champion of safe streets and Safe Routes to School and has served on the Board of Directors of PEDS—a non-profit organization dedicated to making metro Atlanta safe and accessible for all pedestrians. www.radarsign.com