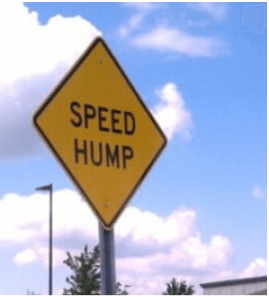 After living with temporary speed humps for a year, one community said “no” to a permanent installation. Council members in Peters Township, Pa. recently rejected a traffic calming plan to install two permanent speed humps at a residential intersection.

When temporary bumps were installed last year, residents were able to experience the disruption these devices bring. While it is common for residents to complain about the noise at night as cars go “bump” over the speed humps, one resident explained that many drivers were actually honking as they crossed the obstruction. He went on to express another serious concern, “I’m going over these speed bumps eight, nine, 10 times a day. It will wear on my cars after a while.”

The true effectiveness of the devices was also questioned. “It’s been my observation that you get some reduction of speed at the speed hump,” Councilman David Ball said. “But after that, back to normal.”

One last nail in the speed hump coffin is that, in the end, only around 28 percent of the people were actually in favor of the project.

Radar speed signs from Radarsign are the perfect traffic calming solution for residential areas. They are quiet, effective and almost universally appreciated by residents.