ALPHARETTA, Georgia – December 9, 2015 — When a child was hit by a car in a school zone, Little Falls (Minnesota) Police Chief Greg Schirmers knew he needed to slow down traffic on the major 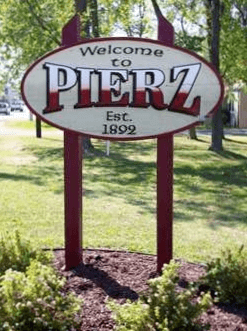 road next to the school. “Fortunately the child survived the incident, but we didn’t want this to ever happen again.” said Schirmers. “Radar speed detector signs are proven to be effective and this incident made us want to install one outside of the school in order to slow people down.”

That’s when Police Chief Eric Hanneken stepped in. As the police chief in the nearby city of Pierz, Minnesota, 14 miles east of Little Falls, he knew about Radarsign® driver feedback signs and the dramatic difference they make. Radarsign—the manufacturer of the world’s first armored radar speed signs—had a track record of slowing speeding drivers in school zones.

Chief Hanneken saw that other towns in his area, including Little Falls, had a need for the radar speed limit signs but he also knew they did not have the budget for them. So, he talked with county leaders, purchased five Radarsign driver feedback signs and distributed them to a few towns throughout the area, including Little Falls. “The first five Radarsign radar speed signs worked so well that I submitted an application for grant money from the State to get more,” Hanneken said. “I wanted other departments in the area, that didn’t have the cash revenue, to be able to utilize the signs and gain the benefit from them.”

Hanneken received the grant and got an additional 25 portable radar speed signs that are now being used throughout five counties: Crow Wing County, Morrison County, Todd County, Wadena County and Cass County. The Model TC-400 is battery powered yet lightweight and takes just minutes for an officer to set up. By using quick mount Go Brackets on existing poles, one sign can be moved to multiple locations, without any tools.

Crow Wing and Cass Counties, in the lake region, saw big improvements in areas beyond the school zones. Here, the Sheriff’s department rotate the radar speed signs to the heavily trafficked lake areas during the summer, when vacationers arrive. “It was a huge success in slowing down traffic,” Hanneken said, “Now the lake associations are thinking of buying their own Radarsign speed signs because they know that the signs really do slow people down.”

For Chief Hanneken, it was about safety and proven results. “I like to use the driver feedback signs in school areas, especially, to slow down traffic. When I pull the research and data from the signs, it confirms for me that it actually decreased driver speeds.” While officers still write speeding tickets, Hanneken reports that in parts of town where they have signs installed, drivers approach, they tap their brakes and speeds decrease.

“Law enforcement officers around the country told us they need a portable sign that they can easily relocate,” said Charlie Robeson, Radarsign Co-founder and Director of Sales and Marketing. “Our Model TC-400 was specifically built so that it can be used in multiple trouble spots with a quick, easy mounting process that requires no tools. Police Chief Hanneken’s idea to implement a program across multiple counties is a great example of how police departments can maximize their efforts to make streets safer.”

In Little Falls, where the student was hit by a car, Chief Schirmers said the driver feedback signs also provide peace of mind, “Radarsign speed signs make a huge difference; there is a dramatic difference in speed. The school district really likes them because they bring people’s attention to how fast they’re going and raise awareness about safety and pedestrian traffic. One made such an impact, we realized we needed a second sign in the school zone.”