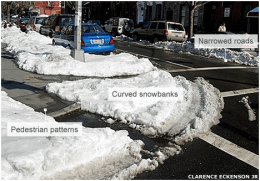 From New York to Denver to Washington, D.C. to Michigan to Vancouver, a new term is making international news. #Sneckdown – a portmanteau of the words “snow” and “neckdown” has become a phenomenon across the United States and Canada. Neckdowns, sometimes called curb extensions, are used to increase visibility as well as reduce crossing time for pedestrians.

The first documented attempt to use snow calming as an indication of true travel patterns for vehicles, cyclists and pedestrians was in 2001. Transportation Alternatives pointed out the large swaths of unused roadway where pedestrian safety measures could be installed. As Clarence Eckerson of Streetfilms points out, “The snow is almost like nature’s tracing paper. It’s free. You don’t have to do a crazy expensive traffic calming study. It provides a visual cue into how people behave.” Clarence first brought broad attention to this idea during New York’s 2006 blizzard when he posted a pair of videos documenting examples of these conditions in New York City.

Seven years later, the winter of 2014 has offered even more opportunities for free snow calming studies, even into the Deep South. While a succession of major winter storms may cost the U.S. economy nearly $50 billion in lost productivity this year, traffic planners and pedestrian advocates may use this opportunity to promote permanent traffic calming solutions to make their communities safer.