ALPHARETTA, Ga., Feb. 28, 2017 —The 10.4 percent jump in U.S. traffic deaths in the first part of 2016, as reported by the U.S. National Highway Traffic Safety Administration (NHTSA), reflects more than just lives lost. It represents more than $836 billion in economic loss and societal harm. This follows a 2015 increase in traffic fatalities—which ended a five-decade trend of declining traffic deaths. As a result, the NHTSA has adopted a bold goal: “zero road deaths within 30 years.” With some 28 percent of all traffic fatalities involving speed, traffic calming may become a top focus for the nation through the year 2046.

“Speed is a totally controllable factor on roadways,” said Charlie Robeson, co founder and managing partner at Radarsign, the manufacturer of the world’s first armored driver feedback sign. “Radar speed signs are scientifically proven to slow speeding drivers and have the potential to play a significant role in achieving the NHTSA’s ‘zero road deaths’ goal.” 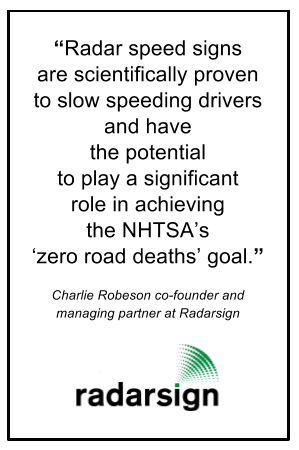 Studies show that radar speed signs are effective as both short-term and long-term traffic-calming solutions:

Additionally, compared to other traffic-calming options, radar speed signs from Radarsign are an affordable solution. The signs, which augment and replicate the work of law enforcement officers, can provide 7/24 traffic calming for years, resulting in much safer streets.

In 2004, Atlanta-based Radarsign® established new industry standards for traffic-calming solutions with the debut of the world’s first armored driver feedback sign, which are vandal, weather and bullet-resistant. The industry’s most durable radar signs are also the most ecological and energy efficient. Engineered and manufactured in the USA, all Radarsign products are MUTCD-compliant and utilize recycled aluminum, innovative LED reflector technology, minimal battery power and solar panels to deliver bright, easy-to-read feedback to drivers. Radarsign products are scientifically proven to reduce drivers’ speeds and have been entrusted to provide safe and effective traffic-calming solutions for: municipalities, treasured national parks, schools, neighborhoods, military bases, and private and public development projects across the U.S., Canada and overseas. www.radarsign.com.

The State of Georgia, where Radarsign is headquartered, has ordered a ‘shelter in place’ program for the entire state for the month of April, 2020. The health and safety of our employees, and their families, is paramount to the business philosophy at Radarsign.

Effective immediately, Radarsign has designated that all employees will work from home. You will still be able to reach any of our staff, through our corporate phone, business cell, and email.

Production and shipping of our radar speed signs will continue, in a limited capacity, for the month of April. We have built sufficient inventory of most models to allow us to ship product within 5 business days of receiving an order.

Tech support for our products will continue as well, The response time will not be immediate, but you should receive a callback within 30 minutes or less.

We appreciate your patience, and business, during these most unusual times. God bless, and keep well.