ALPHARETTA, Ga., February 9, 2017 – For Radarsign™, the manufacturer of the world’s first armored driver feedback signs, 2016 delivered the strongest cluster of marketplace-growth indicators since the company was founded in 2004. Radarsign saw record-breaking growth through a number of key metrics: 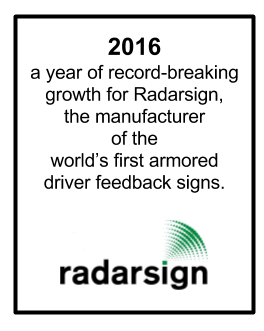 “Radarsign products are designed and manufactured in the U.S.A., which has emerged as a key decision-making consideration for new and returning customers,” says Charlie Robeson, Radarsign co-founder and managing partner. “Consumer support of American-made products paired with Radarsign’s reputation for durability and portability are the reasons our customers choose Radarsign over other manufacturers.”

One constant that continues to fuel growth is repeat business. “In 2016, more than 20 percent of revenue came from existing customers,” says Robeson.  “Customer satisfaction with our products is a key part of our company quality initiatives and that is clear when we see large numbers of returning customers.”

Radar speed signs are effective because of feedback loops, a concept which states that providing people with information about their actions in real time and giving them an opportunity to change those actions, pushes them toward better behaviors. Action, information, reaction.  In areas considered to be “autopilot journey” destinations, drivers often break the speed limit, brake too late or don’t stop at pedestrian crossings. Strategically placed, radar speed signs can serve as triggers, stimulating drivers to transition from autopilot to attentive.