ALPHARETTA, Ga., May 8, 2012—The University of Texas MD Anderson Cancer Center — rated by U.S. News & World Report as the nation’s top-ranked cancer treatment center—extends its world-renowned focus on excellence beyond the hospital walls and into the surrounding streets with driver feedback signs by Radarsign™. 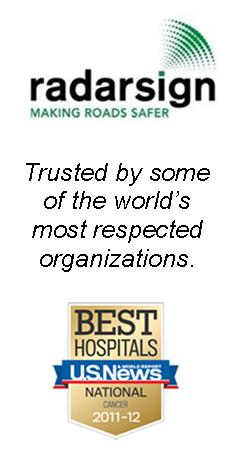 Pressler Street, a four-lane boulevard that runs in front of MD Anderson’s T. Boone Pickens Academic Tower, serves as a main thoroughfare for some of the 60,000 patients treated and diagnosed by the hospital each year. The wide-open stretch of road makes it easy for drivers to ignore the 20 mph speed limit. Today, though, a solar-powered radar speed sign by Radarsign reminds speeding drivers to adhere to the speed limit.

Radarsign driver feedback signs are an excellent solution for medical campuses because they are quiet and do not interfere with patient transport. Studies have proven that vertical traffic-calming measures—such as speed humps and speed tables—interfere with response times of emergency vehicles, with each speed hump costing up to ten seconds in response time. For elderly patients and those recovering from injury or surgery, traveling over humps can be quite painful.

MD Anderson is now one of a growing list of notable hospitals—including the VA healthcare system, the largest in the U.S.—that have made Radarsign the provider of choice.

In 2004, Atlanta-based Radarsign™ established new industry standards for traffic-calming solutions with the debut of the world’s first armored radar speed signs, which are vandal, weather and bullet-resistant. The industry’s most durable radar speed signs are also the most ecological and energy efficient. Engineered and manufactured in the USA, Radarsign products are MUTCD-compliant and utilize recycled aluminum, innovative LED reflector technology, minimal battery power and solar panels to deliver bright, easy-to-read feedback to drivers. Radarsign products are scientifically proven to reduce drivers’ speeds and have been entrusted to provide safe and effective traffic-calming solutions for: municipalities, treasured national parks, schools, neighborhoods, military bases, and private and public development projects across the U.S., Canada and overseas. www.Radarsign.com.