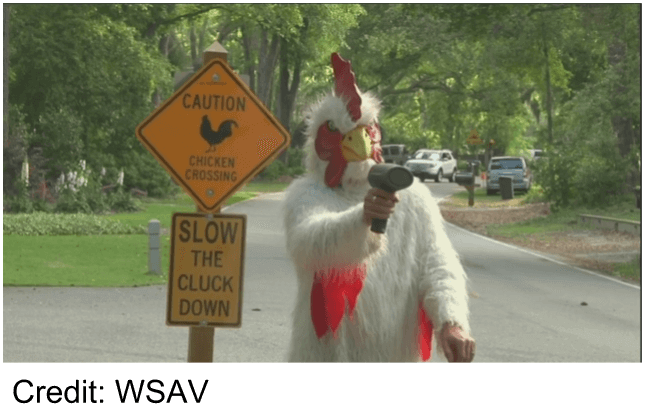 Residents in one Hilton Head Island neighborhood are frustrated about the cars speeding through their neighborhood. But when Logan Cambron’s chicken was hit and killed by a careless driver, he took the matter into his own hands… or took it under his wing.

Cambron donned a chicken suit and began patrolling his neighborhood armed with a radar gun. Actually, this “chicken man” is on to something that Radarsign has known for a long time. When drivers travel on familiar routes, they tend to become less attentive, often running stop signs and breaking the speed limit. These “autopilot” drivers need some interruption or trigger to prompt them to re-engage with their surroundings. Like seeing a man-sized chicken wielding a radar gun, a flashing radar speed sign alerts drivers to pay attention and slow down. To learn more about the science behind driver feedback signs from Radarsign, check out this article.