Cut-through traffic is a big problem for residential areas, causing residents to be fearful walking in their own neighborhood. Traffic apps are a large contributor. Waze, Inrix and other traffic apps have become a handy, go-to tool for finding the shortest and fastest route around town, often directing drivers off the main roads and onto residential streets. It’s just one of the many ways drivers can be distracted and distracted drivers are more prone to speed. It’s a dangerous combination. 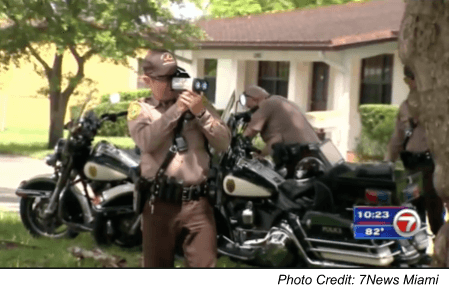 This is a growing problem across the U.S. Andrew Scheinthal with 7News Miami reported on one South Florida residential street where residents feel their safety is threatened due to cut-through traffic.

Officer Alejandro Munoz of the Miami-Dade Police, who patrols one of these areas was interviewed for the story. “As I’m talking to you, I’m positive we’re going to get speeders while we’re speaking on camera.” Within minutes, several speeding drivers were pulled over.

But Munoz admitted he’s seen worse. “A vehicle lost control, got on the sidewalk and hit one of the parked vehicles at the residence. That could have very easily been somebody walking inside their home.”

Not only can the apps can create a hazardous environment, they are also a financial burden for municipalities.

“We’re spending a lot of money on police enforcement and public works infrastructure to try to address the traffic and try to slow it down,” said Mayor Eugene Flinn of Palmetto Bay, Florida.

Radar speed signs are scientifically proven to combat both distracted driving and speeding. This is because they leverage feedback loops, a concept based on giving people people real-time feedback about their behavior, then giving them an opportunity to change that behavior, and they will do so.

Used as part of a larger, comprehensive strategy to combat distracted driving, radar speed signs can serve a dual purpose: to regulate driver speeds and to redirect drivers’ attention back to the task of driving. This is especially important in residential areas, when pedestrians are at risk.

For a deeper look into this, take a look at Radarsign’s white paper, Speeding, Distracted Driving and Radar Speed Signs: The Science that Connects Them.