South Pittsburgh residents in the Mount Washington community are seeking a solution to slow speeding drivers on Grandview Avenue. 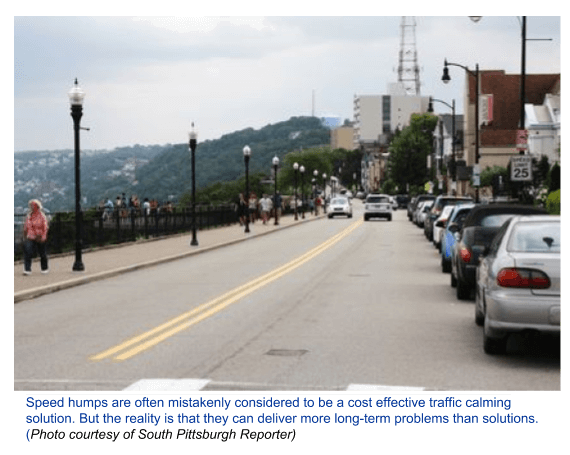 The city has allocated $50,000 of the annual budget to traffic calming initiatives for a problematic section of Grandview Avenue. The current plan is to use these funds to install seven speed humps approximately 250 feet apart.

“This is the first year we’ve had funding, so this is the first opportunity we’ve had to actually put something in place,” Municipal Traffic Engineer Amanda Purcell told the South Pittsburgh Reporter in “Speed humps may be used to calm Grandview traffic.”

Speed humps are mistakenly considered to be one of the less expensive traffic calming solutions, but as another Pennsylvanian community has learned, the costs don’t end at installation. Maintenance can be costly, especially in climates that deal with frequent snow, ice and salt on roadways. Also, personal vehicles can suffer damage when the humps are not constructed or installed properly. There are additional drawbacks:

While driver feedback signs from Radarsign reliably slow speeding drivers, they do not have the maintenance costs associated with speed humps. They are actually quite affordable and do not impact all speeds of traffic the way physical devices, such as speed humps, do. Radar speed signs are scientifically proven to be effective in the short and long-term.