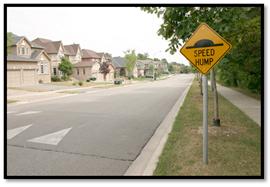 Every day, municipalities, HOAs and school districts across the nation face problems with speeding drivers. For decades, speed humps were the only traffic-calming solution available. Today, the antiquated speed hump—a traditionally popular solution to speeding drivers—has become a controversial lightning rod in conversations involving traffic-calming solutions coast-to-coast and around the world.

Additionally, some have observed that speed humps do not change driver behavior and encourage other dangerous driving behaviors, such as going “off road” to avoid the humps.

In 2008, in Hillsborough County, Florida some of the Carrollwood community faced significant traffic-calming dilemmas. Dangerous driver speeds had caused the roads to become unsafe for pedestrians, cyclists and other drivers. In response, the county invested $2 million in hundreds of speed humps, cushions and other devices. Within a short period of time, complaints about the speed humps began to pour in from residents, tourists and emergency responders who demanded a better solution.

The controversy was settled legally in 2009 when arbitrators ruled that about one-third of the newly installed speed humps should be removed. The result: Hillsborough county has spent at least $200,000 to remove the speed humps in Carrollwood Village alone.

Time and technology have eclipsed the traditional fix. Residents and community leaders—armed with online access to information and vendors—expect and demand an improved solution that could accommodate a broad range of needs.

In addition to speed hump removal, the arbitration report also recommended the installation of additional driver feedback signs—a solution that had been part of the original plan but delayed due to the controversy. With some 40 driver feedback signs to be installed within a beautiful residential setting, cost and aesthetic appeal became primary considerations. Local community leaders Libbie Jae and Jennifer Fritch spearheaded the search for a cost-effective and attractive solution.

“Driver feedback signs are subtle but very effective reminders to drivers without all the noise and disruption of speed humps, which have been quite divisive,” says Libbie Jae. “Radarsign offers a great solution that answered all of our needs: Not only are the signs silent and attractive, they are also very affordable and the solar power option makes them a green solution. I just see Radarsign as a win-win all the way around.”