When you think of small towns and law enforcement, do you think of fictional towns like Mayberry, North Carolina, or Hawkins, Indiana? Or do you immediately think of your own town? It’s not surprising if you first thought of your hometown when you consider that one in 10 Americans live in small towns with populations of less than 25,000. What may surprise you, though, is that this represents some 33 million people in about 75 percent of all municipalities in the U.S.

That’s right. The huge majority of U.S. municipalities are categorized as small towns!

Regardless of size, common issues face all munis. Larger ones have the benefit of deeper pockets and bigger staff, while smaller ones must be more creative to maximize limited resources. In small towns, we are seeing innovative strategies to solve one of America’s most common public safety and law enforcement challenges: traffic calming.

How these small municipalities are addressing traffic calming is setting new standards for effectiveness, efficiency and budget management. Here are the stories of four towns and the leaders who are spearheading change to make streets safer.

In 2016, Betterton faced a longtime, recurring problem with speeding drivers. Like many small towns, “Main Street” in Betterton is the only road into and out of the community. It’s a state highway with a speed limit of 25 mph that ends at a popular beach. Of the town’s citizens, some 60 percent live there only part-time as their Betterton residence is a second home. 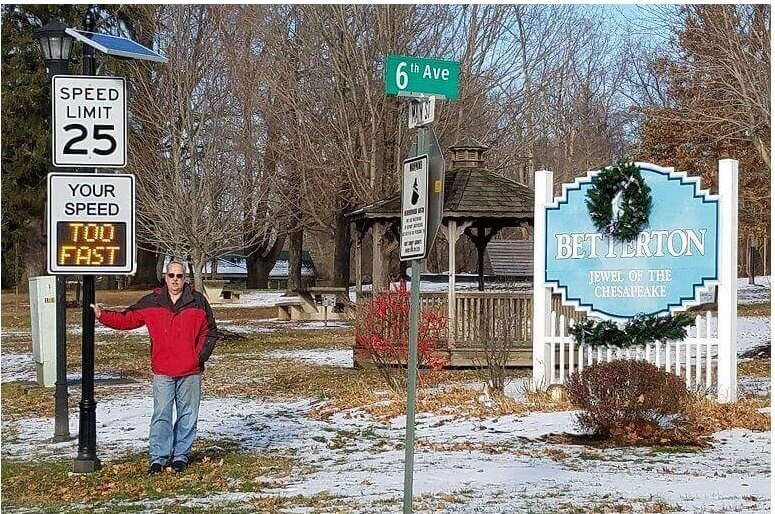 Betterton’s traffic calming struggle and solution was featured in an article—“How One Small Town Slowed the Leadfoots Down”—at www.governing.com. According to Mayor Sutton, “They commute in for the weekends, holidays and summers. They want to get in quick and get out quicker. In doing so, drivers sometimes forget the rules of the road.”

Because the road is owned by the state, the state determines what restrictions can be used to control speeds.

Enforcement Was Not Efficient

Not every small town has the financial resources to accommodate its own police department, and these communities rely on local sheriff’s departments or state police. This is how Betterton operates. According to Sutton, “We contract with our county sheriff’s department, paying for intermittent, overtime services that include patrol, enforcement and more. So when residents complain about speeding drivers, we try to coordinate law enforcement services to address that need.”

Officers were scheduled for patrol and enforcement during peak traffic times, right around rush hour. As it turns out, the city would soon learn, there weren’t a lot of speeders at those times.

At one point, Betterton and the state of Maryland worked together to install a new streetscape and stone road surface. According to Sutton, “It was intended to remind drivers to slow down as they enter town. This worked but only for a short period of time. We needed something else, a solution that was both effective and acceptable to the state. We got that, and more, with a radar speed sign.”

Radar speed signs have been around for decades, and they are scientifically proven to be effective at slowing speeding drivers. Betterton purchased a radar speed sign from Radarsign, the manufacturer of the world’s first armored driver feedback signs. Sutton shared the town’s best practices and the results like this:

“The one we installed in November 2016 came with software that captures data on driver speeds and documents the time of day that speeding occurs. For the first time, we could use analytics to see when drivers were actually speeding. This allowed us to better coordinate law enforcement services when we needed them most.

“For the first week, the sign was activated in stealth mode. While it appeared to be off, the software was still working, capturing benchmarking data. It documented driver speeds as high as 60 mph! The data also corrected some inaccurate presumptions. For example, we had been operating under the assumption that drivers were speeding during rush hour, before and after work. In reality, most of the speeding was happening in the middle of the day.

“These were mission-critical insights for us. By sending this data to the sheriff’s department, they can better help us with speeding, and we can better manage our limited law enforcement funds.

“Of course, radar speed signs cannot replace law enforcement officers, but they can certainly do a fine job of augmenting their work. That’s because the signs operate 24/7 with or without an officer present, which maximizes our investment.”

One of the great benefits of radar speed signs is that they are liked by both citizens and law enforcement agencies, which makes municipal leaders happy.

Radarsign speed signs absolutely contribute to the reduction in speeding and car accidents.

When speeding drivers threatened the safety of Muscle Shoals’ youngest citizens in school zones, the town needed a solution that was effective, affordable and qualified for grant funding. Municipal leaders found all that, and more, in Radarsign. 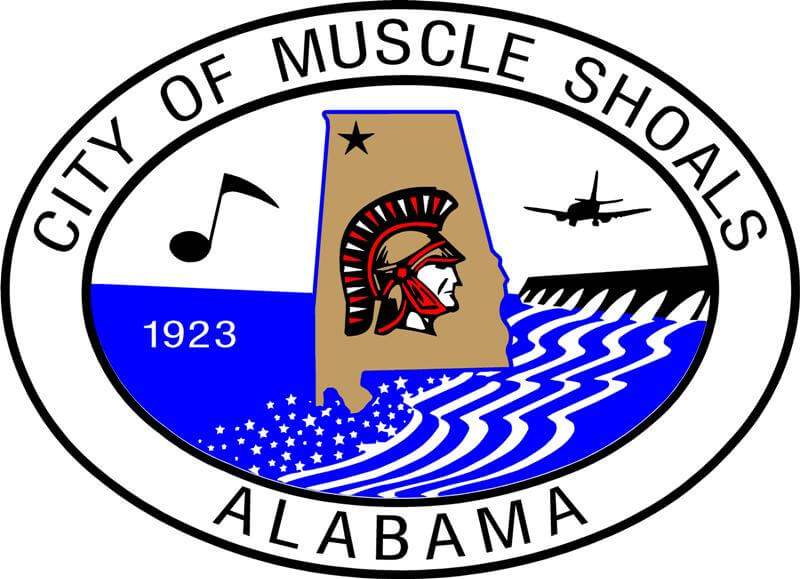 Muscle Shoals Mayor David Bradford said, “We had wonderful results with the radar signs slowing and reminding drivers who, I think, were distracted or in a hurry and didn’t see the regular school zone signage.” City leaders were so impressed with the Radarsign driver feedback signs’ effectiveness that they budgeted for the purchase of 22 more signs over five years and expanded their use to subarterial connectors and, more recently, to residential areas.

Mayor Bradford has more traffic-calming insight than most city leaders. During a 27-year career as a police officer, he graduated from the FBI National Academy and was trained in accident investigation reconstruction at Northwestern Traffic Institute.

“Radarsign speed signs absolutely contribute to the reduction in speeding and car accidents,” Bradford shares. “In the past, many were looking to stop signs as speed deterrents, but they are not nearly as effective as these devices.”

Bradford believes that radar speed signs could be the traffic calming solution for communities of all sizes. “For mayors interested in implementing a radar speed sign program, I recommend it be done in phases. Start with a couple of portable signs and establish specific goals and criteria for usage. Stay consistent with that criteria whether it be school zones or connectors to major arterial roads.”

“The signs are popular, so potentially demand could become greater than capacity. This is why it is important to have guidelines and remain consistent.” 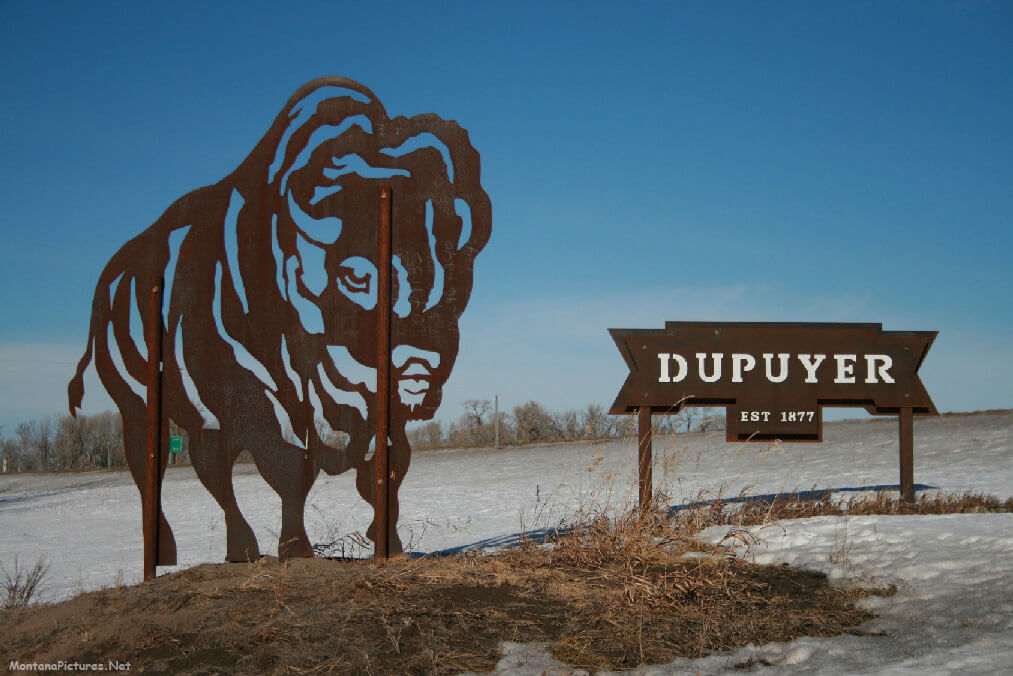 Between Memorial Day and Labor Day, about 134,000 cars pass through Dupuyer. Most are drivers speeding through the town on their way to Yellowstone or Glacier National Parks.

While Montana is the fourth largest state geographically, it is one of the least densely populated. As a result, traffic enforcement resources are stretched quite thin. The town needed a solution that could slow speeding drivers without the use of law enforcement officers. Additionally, it needed to be compliant with state DOT requirements. A solution was found in solar-powered driver feedback signs from Radarsign.

According to community leader Ted Beck, the town secured governmental permission and then sought grant funding for the purchase. “We couldn’t find funding, but this small community felt strongly enough about the need for the radar speed signs that we decided to go it alone and purchase two.”

Signs were installed at both ends of town to remind drivers to slow down as they enter the reduced speed zone. “The signs have been really great,” Beck said. “Both local people and those passing through are slowing down.” After the community installed the signs, state and county law enforcement realized that residents concerns about speeding were serious and have stepped-up enforcement in support of their efforts.

Radarsign educates drivers to change their driving habits, comply with the speed limit and stop speeding.

Radar speed signs are a great solution for larger municipalities as well. In Biloxi, Mississippi, Mayor Andrew Gilich sought a traffic calming solution that could educate the public, encouraging drivers to correct their own poor driving habits and avoid speeding tickets. 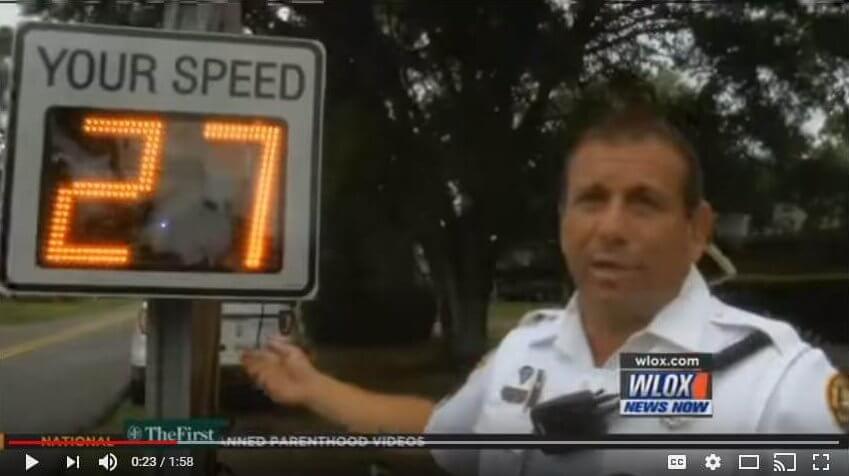 Sgt. Brian Dykes, traffic section supervisor with the Biloxi Police Department, shared how Biloxi came to purchase six radar speed signs from Radarsign. “Mayor Gilich saw these in another city in his travels and thought it would be a good idea. We did some research and assured him that it would be a good idea. And it would help in our effort to alert the public when their driving habits are not what they should be.”  WLOX television reported on Mayor Gilich’s efforts to educate the public with Radarsign.

Radar speed signs work by leveraging a psychological concept called the feedback loop—a behavior modification process that is passive, yet effective in changing driver behavior. Wired.com explains it like this: “Provide people with information about their actions in real time (or something close to it), then give them an opportunity to change those actions, pushing them toward better behaviors.”

These devices offer a long-term solution to speeding traffic. Studies repeatedly show that speeding drivers reduce their speeds when confronted with that information, and they continue to do so over long periods of time.

Of course, the radar speed signs cannot replace law enforcement officers, but they can certainly do a very fine job of augmenting their efforts. That’s because the signs work with or without an officer present, which maximizes a community’s resources.

When you evaluate the flexibility, portability, power options and effectiveness of all traffic calming options, radar speed signs should be on the radar of every mayor in the U.S.

Traffic-Calming Trends is brought to you by the traffic-calming experts at Radarsign. For information on how radar speed signs can support community and government traffic-calming initiatives, visit www.Radarsign.com or call 678-965-4814.

©2018 Radarsign. Any use of “Traffic-Calming Trends” or portions thereof, including reproduction, modification, distribution or republication, without the prior written consent of Radarsign, is strictly prohibited.