Every week, 2 million tractor trailers transport $671 billion worth of goods—some 70 percent of all freight moved—in the U.S. Profit in this billion-dollar industry, is achieved through a delicate balance of speed and safety. 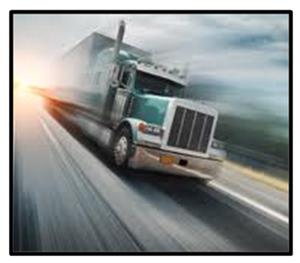 While the trucking industry is vital in supporting the U.S. economy—estimated at more than $255 billion annually—The United States Department of Transportation estimates that there are more than 500,000 truck accidents each year, and according to TruckInfo.net, one person is injured or killed in a trucking accident every 16 minutes. Contributing to these accidents: speeding drivers and the time it takes to slow a tractor trailer.

Case Study 1: Michelin North America
Every day more than 450 tractor trailers come and go at the Michelin North America plant in Anderson, S.C.; that’s one every 90 seconds. In 2005, Michelin sought a solution to slow speeding drivers at their plant. They chose to install two Radarsign TC-500S driver feedback signs along the main entry. For two weeks the signs operated in “off” mode; capturing vital data about driver speeds without the drivers’ knowledge. The data revealed:

“Once the sign was turned ‘on’ we saw an immediate difference,” said Will Irby, Traffic Safety Coordinator at Michelin North America. “We knew drivers were slowing down but Radarsign’s StreetSmarttm data collection software confirmed what we were seeing: 99 percent of drivers began following the speed limit. We reduced 333 speeding big rigs a day to less than 5, just by turning on the driver feedback sign.”

Case Study 2: JBS Tolleson, Inc.
At the JBS cattle processing plant in Tolleson, Arizona, some 70 – 80 cattle trucks come through daily. Operating 24 hours a day, with a single entrance/exit, the traffic was highly congested and even dangerous due to speeding drivers. Having observed a Radarsign driver feedback sign in action—effectively slowing speeding truck drivers—JBS Operational Safety and Health Manager Bert Hood purchased a Radarsign TC-500 with a portable base so that it could be moved to slow drivers at multiple points on the JBS campus.

“The biggest single piece of proof that the sign works is when we move it to a different location at the plant: Drivers still slow down at the old location…as if they have been trained,” said Hood. “Now truck drivers brag about how slow they can drive their big rig on the plant…even under the speed limit!”

Because less than 25 percent of the daily plant traffic is truck drivers, JBS wanted a traffic calming solution that would be effective for all vehicles, from sedans to big rigs.

“The viewability of the sign is perfect for our semi-truck drivers since it takes longer for them to slow down,” said Hood. “We see them braking as soon as the sign is in sight—2,000 feet away from the entrance to the plant.”

JBS Tolleson has taken its plant safety to a new level by combining the Radarsign driver feedback sign with a disciplinary system. If drivers are caught speeding, security guards report their license plate information and issue a warning: if they speed again they are not allowed back on plant property. Only a handful of warnings have been issued and no one has been banned from the plant.

“The signs just work. Before, drivers were going about 35 mph but now I’d say everyone has slowed down…at least 99% of drivers now adhere to the 10 mph speed limit,” said Hood.