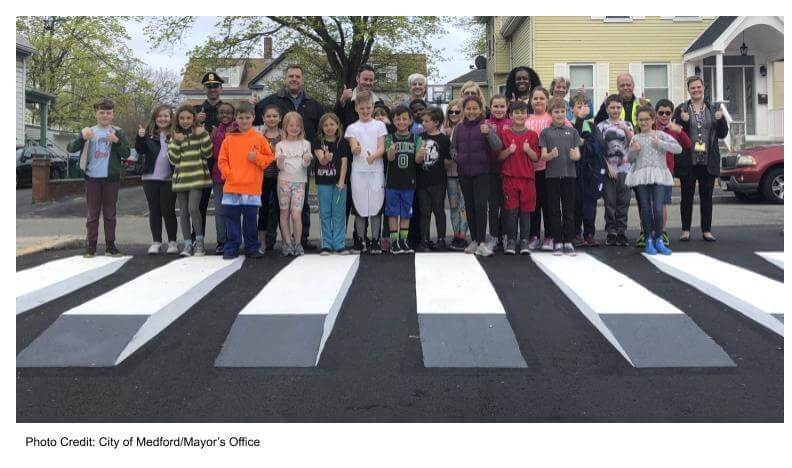 After one of their siblings had a near miss with a speeding car close to their school, Metford, Massachusetts, elementary school students, Eric and Isa, took a proposal to Medford’s mayor, Stephanie Burke. The Boston Globe reported on the students’ desire to create an optical illusion crosswalk outside their school to get drivers to slow down. The mayor said yes.

Three-dimensional crosswalks like these are popular and have appeared in cities all over the world. Pedestrians up close, can tell that it is painted, but to drivers, it appears three dimensional.

But here’s the thing: They are not MUTCD compliant.

They can grab the attention of a speeding driver, but for all the wrong reasons. And because of this, the DOT has determined that they are a hazard. Interpretation Letter 3(09)-8 (I) addresses the issue saying that the creative crosswalks:

Much like radar speed signs, the goal of this street art is to get drivers to slow down. Beyond the fact that they are not MUTCD compliant, they give the driver no feedback about why they should slowdown (other than to take a look at the art). Driver feedback signs from Radarsign, on the other hand, are scientifically proven to reduce driver speeds by a psychological concept known as Feedback Loops. Wired.com, says feedback loops “provide people with information about their actions in real time, then give them an opportunity to change those actions, pushing them toward better behaviors. Action, information, reaction.”