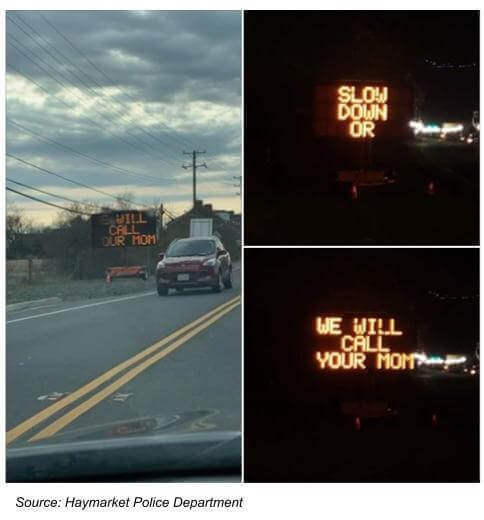 Haymarket Police Department has gotten quite a response to the traffic message board they put up at the end of March. On Facebook alone they have received 1,500 reactions, 142 comments and 859 shares. The sign reads, “Slow Down or We Will Call Your Mom.” I guess some drivers would rather get a ticket than have their mom receive a call from the police about their reckless driving.

The police department was trying to be funny, but at the same time there is a more serious message behind it. They consider their small town a walking community and they want to keep their residents safe.

The message was meant to grab drivers’ attention to consider their speed and their environment, much like driver feedback signs from Radarsign. Radar speed signs are designed to give drivers real time feedback on their speed so they can self evaluate and slow down if they need too. In addition to displaying the driver’s speed, Radarsign’s TC-600 Full Matrix model is also equipped to show message such as Slow Down, Too Fast, and Sharp Curve to name a few. Click here to view all the message options.