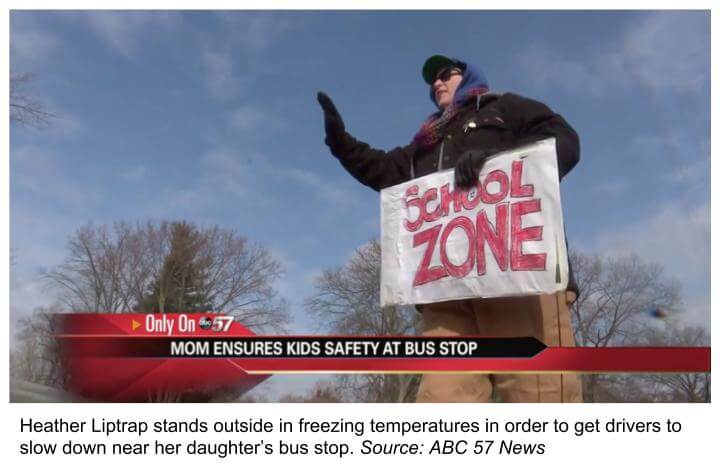 In South Bend, Indiana, Heather Liptrap, has had enough of speeding drivers in the school zone at her daughter’s bus stop. “Enough is enough,” Liptrap told ABC’s Karla Rodriguez. “I did what I thought was right. After so many times of seeing people speeding by, I just got frustrated.”

In November 2018, Liptrap started bundling up to go outside at 3 p.m. every weekday to hold up her handcrafted “School Zone” sign. “The first time I got out there with my sign, I’m not sure if people saw what my sign said but it made me feel like I was doing something,” said Liptrap. 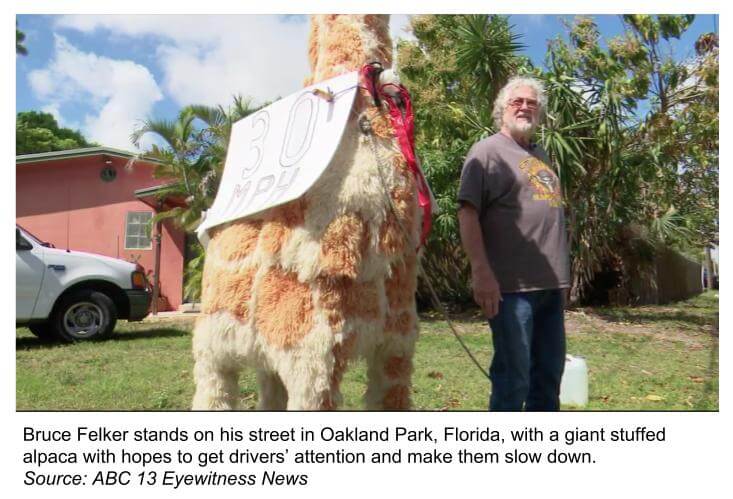 Bruce Felker, of Oakland Park, Florida, lives on a residential road in an area with a lot of children, and he is tired of drivers going too fast.

So what is he doing about it? Felker is standing on the side of the road with a giant stuffed alpaca. The alpaca is holding a sign that says, “30 mph.”

“If it slows them down, and they get the point, that’s what counts,” Felker told ABC 13 Eyewitness News.

In both of these situations, the goal is to capture drivers’ attention and have them take their foot off the gas pedal. From a scientific perspective, these Good Samaritan’s are using the theory of Feedback Loops to get people to change their behavior. Radar speed signs from Radarsign can have the same impact and operate with the same scientific approach. They flash the driver’s real-time speed, making them aware of how fast they are going. In most cases, overall compliance with the posted speed limit will go up by 30 to 60 percent. Radarsign offers a variety of sign options to help communities combat speeding problems.

To learn more about Feedback Loops, the science behind them and how radar speed signs from Radarsign leverage that technology, click here: https://www.radarsign.com/why-radar-speed-signs-work/