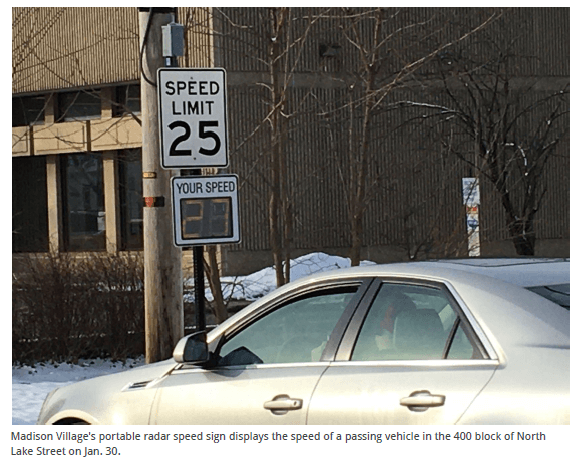 According to The News-Herald, MVPD Chief Troy McIntosh is pleased with the purchase, saying, “So far, we’ve been happy with the performance of the sign.”

Specifically, the MVPD is seeing the advantages in slow speeding drivers and in Radarsign’s StreetSmart software’s ability to confirm and refute residents’ concerns about speeding problems. The article also reported on these TC-400 features and benefits:

The TC-400 is effective in slowing speeding drivers. According to McIntosh “If you go down near the sign, you see a lot of brake lights, people realizing exactly what their speed is and what the speed limit is in that area,” he said. “I think that’s its greatest value so far, is just awareness and a deterrent.” He also noted that the sign “seems to have a calming effect,”

After deploying the TC-400 in response to resident concerns about frequent speeders, StreetSmart traffic data reporting software revealed that there was no real speeding problem. The sign allowed the MVPD to respond to the resident’s concerns and assure them that the street was indeed safe.

The TC-400 battery power performs surprisingly well. According to McIntosh: 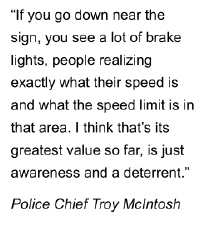 “The TC-400 was placed in a location for longer than expected and “The battery (that powers the sign) seems to be holding up better than maybe I thought with the cold.”

The TC-400 is easy to use. The signs also allow police to use laptop computers, smartphones or tablets to download statistics — such as number of vehicles with speeds recorded; speeds and times recorded; average overall speeds; and peak vehicle speed — gathered at test sites for quick analysis.