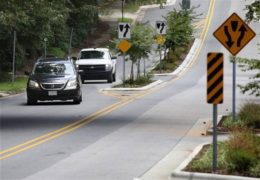 Residents in Queens, NY have been waiting four years for a speed hump. The DOT told residents that the hump was close to being installed in 2014 until a resident complained about its proposed location. Decisions about relocation have been hampered “due to driveways and other factors.”

To many, speed humps seem to be a “quick fix” for dangerous, speeding traffic in residential areas. Unfortunately, it isn’t quite that simple. The process can be lengthy, expensive and divisive as Raleigh, NC city officials have found. The city has a waiting list of over 200 streets awaiting some kind of traffic calming application, like speed humps. The process may require a traffic study, resident petitions and community surveys before a project gets the green light. Sometimes, residents agree that some kind of traffic calming intervention is needed, but they may not agree on what that intervention should be, which delays or prevents action.

Additionally, speed humps have some serious flaws, as Martha Taylor, chairwoman of Queens Community Board 8, explained. “They can be terribly annoying when they’re in front of your house at the middle of the night and the garbage truck goes by. I don’t think people understand the downside of speed humps.”

Meanwhile, cars are still speeding up and down these streets, and residents are still worried about the safety of their families. Perhaps communities would be better served if some of this effort and expense were directed toward implementing a driver feedback sign program. These devices are affordable, effective and almost universally welcomed by law enforcement, citizens and city leaders. Radarsign offers a variety of driver feedback sign solutions that may serve these communities and yours.