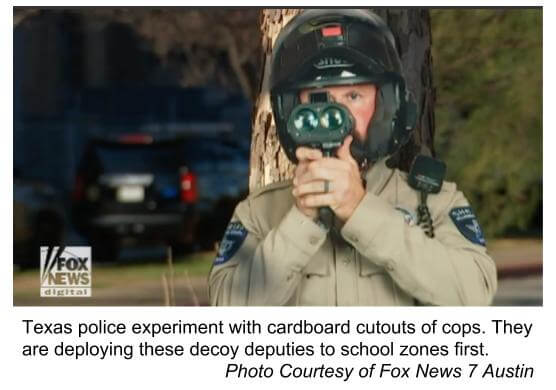 Williamson County Sheriff Robert Chody is trying something new to tackle speeding—a cardboard cutout of a deputy. Yes, Sheriff Chody has created a life-size cutout from the photo of an actual deputy aiming a radar gun at oncoming traffic. Up close, you know it is fake, but from a vehicle traveling down the road? Drivers are not so sure.

“When you’re going 20, 30 miles per hour and you see the silhouette you’re immediately braking, slowing down and that’s exactly what we are trying to do,” Chody told Fox News.

Obviously, the plan is to keep area residents guessing by sometimes paring these with the real deal—a ticket-writing officer.

Stories like these are entertaining. And, while I applaud a creative approach, there are very real drawbacks to this one. The first time a driver sees this, they will slow down out of fear. The second or third time, they may not react at all, much like the boy who cried wolf.

The long arm of the law would be better served by a radar speed sign, like Radarsign’s portable TC-400 or the larger TC-600. Radarsign speed signs are scientifically proven to be effective over the long-term, with and without an officer present. This is because radar speed signs educate drivers on their speed so they can change their behavior and slow down. Data confirms a consistent reduction in average speeds and a 50-70% reduction in the number of drivers who speed more than five mph above the speed limit. More than two years after installation, data indicates a long-term shift in driver behavior (Alpharetta, Georgia, location, comparing week-one data with week-109 data). [Source: Radarsign Study]

Radar speed signs from Radarsign are constructed with an industrial design for durability that is weather, vandal, and graffiti resistant. The cardboard cops can’t come close.

Follow the links below to see how law enforcement agencies are leveraging Radarsign and the science of driver feedback and education to slow speeding drivers: